After a couple of years off due to Covid-19 restrictions and running as a single op in 2020 and 2021, K8MQP operating for the South Lyon Area Amateur Radio Club from Livingston County has returned to the top of Multi-Single Transmitter category in 2022. This year’s operating team consisted of K8CC, Tom Pruett (brother of Dave); K8CTR, Josh Pruett (grandson of Dave); KE8OC, Tim O’ Sullivan, and W8MJ, Ken Meier. Yes, the legacy of K8CC lives on in MQP through Dave’s brother Tom. Tom was able to obtain Dave’s call through the FCC Call Sign application process and keep it in the family in Dave’s memory, so there was a little added incentive for the K8MQP team operation this year. This team came in with a winning score of 304,388 and set an all-time new record for Multi-Single Transmitter category while breaking the old record set back in 2012 of 227,424 points. K8MQP had band breakdowns of 224 on 20, 594  on 40, and 238 on 80 for total qso count of 1056, nearly evenly split between CW, 497, 47% and phone, 559, 53%. The first hour of the contest was the best QSO hour for K8MQP with 131 QSOs with 50 CW and 81 phone QSOs and 73 multipliers. They had additional hours of over 100 QSOs during the 4th hour (120), 5th hour (107), and 10th hour of (112). Overall K8MQP averaged 88 QSOs an hour during the 12-hour operating period and had a total of 196 multipliers, 84 CW and 112 phone. They had 119 unique multipliers, and worked 63 Michigan counties along the way. This is the first time in all the years K8MQP has been operating Multi-Single Transmitter that they broke a score of 300k. Congratulations to K8MQP crew on record breaking winning score.

Coming in 2nd place in Multi-Single Transmitter this year with a score of 69,382 is the husband-and-wife operating team of KX8D, Duane Durflinger and N8JML, Barbara Durflinger from Presque Isle County in upper Northern Michigan with the Blossomland Amateur Radio Club. This team operated the entire contest on phone with 614 QSOs, and had band breakdown of 1, 195, 391, and 27 from 15 down to 75 meters. Their first hour of the contest yielded 75 QSos with 28 multipliers and their best hour of the contest was the 10th hour with 84 QSOs. They averaged 56 QSOs an hour over a period of 11 hours of operation. They had a total of 113 multipliers, and worked 61 Michigan counties while making 13 band mode changes during their time on the air. They were able to secure 2nd place over W8USA while operating phone mode due to more time on the air. Congratulations to Duane and Barbara on a 2ndplace finish in MQP.

The third-place finisher this year in Multi-Single Transmitter Category was the Michigan Amateur Radio Alliance Club, W8USA, from Kent County. This team consisted of K8OOK, Mike Eilers, KC8KVR, Larry Dells, KD8SZZ, Corey Grahn, N8NIJ, Dan Markowski, and W8MSK, Jerry Wihkoski. W8USA came in with a score of 45,968 while operating on 20 meters with 35 QSOs and 40 meters with 222 QSOs during their 8 hours on the air. Their QSO total of 257 consisted of 131 on CW, 51%, and 126 on phone, 49%. Their best hour of the contest was the 11th hour with 91 QSOs, all on phone and they had 5 band-mode changes during the contest. This team had multiplier breakdown of 57 CW and 54 phone multipliers, and had 74 unique multipliers while working 32 Michigan counties. Congratulations to this team on a fine 3rd place finish in MQP 2022. 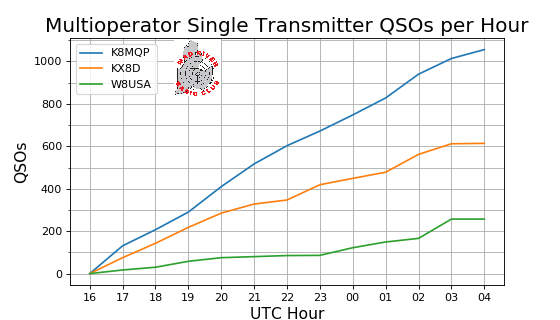 The Multi-Multi Transmitter winner in MQP this year is the team of N8OL from Berrien County with the Blossom Amateur Radio Association. The team was composed of the following 9 operators, K8JNO, Scotte Garrison; K8VBL, Thomas Turner; KC8SWY, Ken Schneider; KE8MOW, John Andrasi; KE8PJQ, Andrew Woroniecki; KE8TEM, Vincent Dexter; KD8NOH, Timothy Richards; N8OL, Ken Jewell; and N8VOX, Anthony Gettig. This team finished with a winning score of 76,209 while operating 10 hours of the 12-hour contest period. They had band breakdowns of 22/428/51 and accumulated a total of 510 total QSO’s with 63 on CW, and 447 on phone. The team had high QSO count of 101 4th hour and 131 during the 9th hour of operation, while averaging 51 QSOs over the course of their time on the air. They also had a total of 133 multipliers, 32 CW and 101 Phone, of which 104 were unique and 61 Michigan Counties were worked. Congratulations to this team for the group of members they put together to put Berrien County on the air and win the Multi-Multi Transmitter Category. 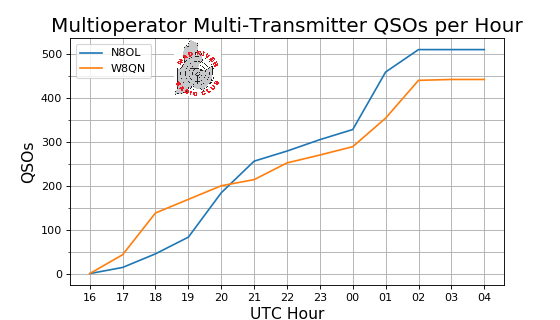 Coming in 2nd place this year in Multi-Multi Transmitter category is the operating crew of W8QN out of Midland County with the Midland Amateur Radio Club. This team consisted of the following members, KC8ITI, Lee Hodges; KE8DON, Max Schneider; KE8RNA, Kanushi Desai; N8ERF, Dennis Klipa; and W8QN, John Wolters. They had score of 45,968 while operating on phone only, with band breakdowns of 120, 282, 36, while operating 10 hours of the contest period. The uniqueness of this team was having a young member Kanushi Desai, KE8RNA, a 13-year-old operating along with his Elmer N8ERF, Dennis Klipa. Kanushi obtained his Technician license back in March of 2021 and by July 2021 had already upgraded to General Class.  What excitement he must have felt being part of a Multi-Multi operation and helping put Midland County on the air while enjoying the camaraderie of fellow amateurs. This team had a total of 442 QSOs during their time on the air and a total of 104 multipliers, which included 57 Michigan Counties. The majority of their multipliers were obtained within the first two hours of the contest with a total of 67. Their highest QSO hour was the 2nd hour with 95 QSOs, and they also had an hour of 86 QSOs in the 10th hour. Congratulations to this team for a nice 2nd place finish.

There was no 3rd place finisher this year in Multi-Multi Transmitter. The two entries above were the only Multi-Multi entries for MQP in 2022.

For purposes of the Out of State Single Operator category, the western region is defined as those states which lie entirely or mostly in the Pacific or Mountain time zones. This definition includes the states of AK, AZ, CA, CO, HI, ID, MT, NM, NV, OR, UT, WA and WY, plus the Canadian provinces of SK, AB, BC, NT and YT.  Dave Tucker, KA6BIM, returns to the top of out-of-state western-region category with a nice balance of CW and phone operation, with his best rates during the first 3 and last 4 hours of the contest though he was on-the-air every hour. Dave made most of his contacts on 20, 40 and 80 with a few QSOs on 15.

Out of State Clubs

Thanks to Plaque Sponsors

In Memory of Jeff Miller – WB8WKQ

Top Club Score – Out of Michigan

Next Running of the Michigan QSO Party